This year I'm participating in the One Little Word workshop from Ali Edwards.
In December, while working on my December Daily, I started thinking about what my word would be.
First I thought it would be change, cause I want some changes in my life, regarding my work. But the word Create started to pop-up and asked to be seen. So Create it is! 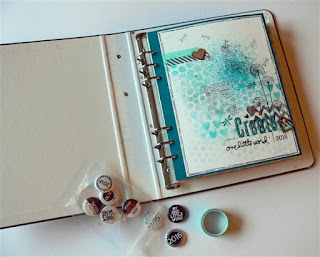 This year I want 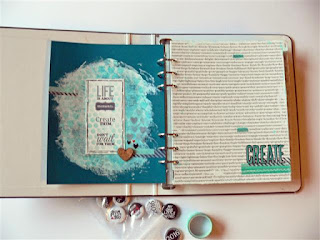 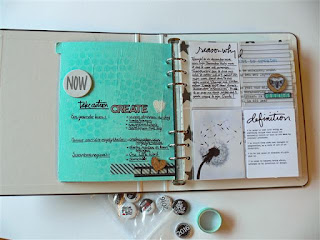 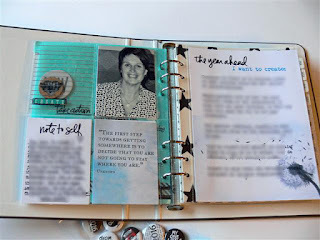 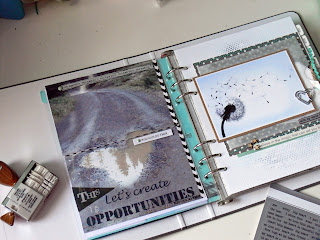 Day 11 is about the little Santa's I have. Every year when I decorate the Chirstmastree, they come out of the box too. I have them quit a few years now. Bought them together with my mom. Their collection is gathered with ours now... 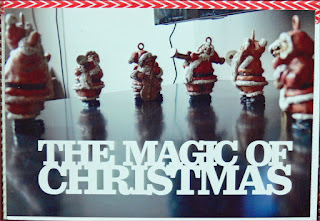 I love how they all stand together and play music. They bring a smile on my face!! 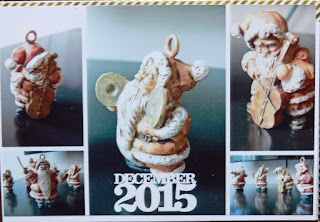 Day 12: A Christmas market in the neighbourhood.

Aat the market were a lot of stands, some Christmas related, some not.
But the thing I loved the most are the little reindeer...
Aren't they cute? 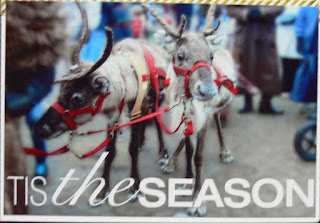 This is a flip-up card, with inside the journaling and a pic of Santa who was there to.
He looks like he came from an old card. 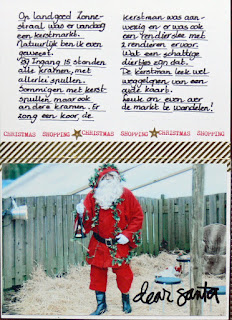 Gonna wor on day 13 and 14 now, so hope to share those days later today.
Thanks for stopping by!

p.s. I'm so glad I started scraping again! I love it so much. It makes me happy! So... I decided that I have to do that more and signed up for One Little Word from Ali Edwards, and for her Storykits...
Anyone else joining her??

I'm up to date with my December Daily, just had no time to show it on my blog.
But... here are my pages... 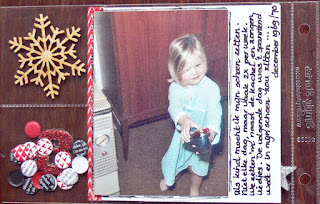 December 3: A picture from the past. I was around 3 years old I think and had set my shoe for Sinterklaas. The next day there was something in it, I think chocolate! 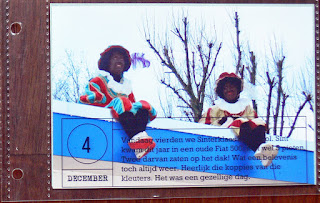 December 4: Sinterklaas at school. Two "pieten"on the roof. The kids liked it som much!

And some pics of the kids having fun.

December 5: "Pakjesavond" with family. The first time Bo has bought presents herself.

In the envelope are the poems we did get. 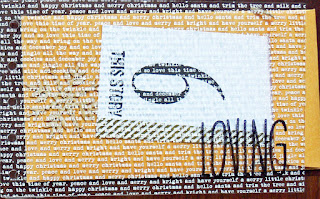 December 6: It would have been my dads 80 th birthday. In the envelope is a letter to him. 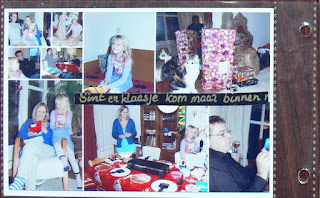 An old pic of my dad, just like he was...
We celebrated this special day with my uncles and aunts. I made a buufet and it was a wonderful day to remember my mom and dad with each other.

December 7: My mother in law come home from the nursinghome.

December 8: When I came downstairs this morning the christmas tree was up. My hubby put it up late last night as a surprise. The first time we have a fake tree. It was form the aunt, who died in August.

December 9: decorating the tree. I did put up a tripod and took some shots of me decorating. 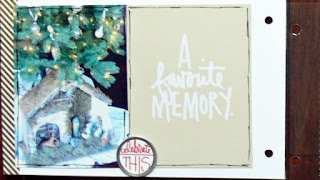 It's a fold-out page. 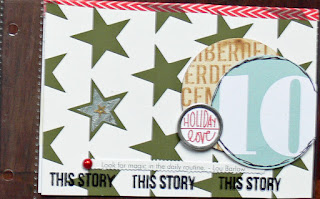 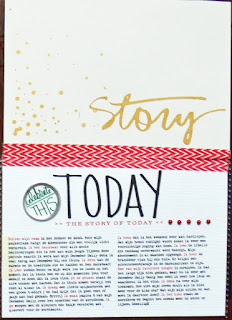 With the story of today. I took some prompts and filled it in.
Hope to do it another day later in December again.

And then it's time: it's December and December Daily starts.
Here is my page for 1 December: 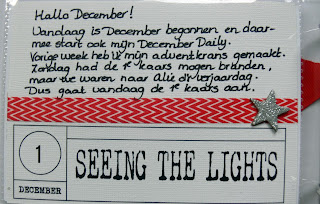 My first page is about my advent wreath. How I maked it earlier this week and that the first light is on on December 1. A bit to late, cause we were away Sunday. 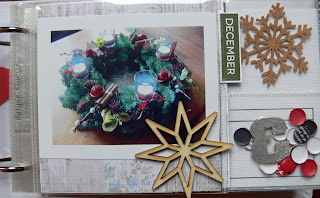 This is the right page in the album and underneath you can see the page out of the album. 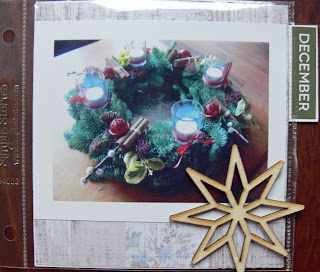 For December 2 I used the pics that Julie Ann Gaudet placed on the December Daily facebook page after receiving my package. So fun to see this!!

Julie wrote a message on the DD favebook page:
This is my first year doing DD and am falling in love with this process and love to check in daily what everyone is up to and where you are all from. This fascinates me!! So I had a spark of an idea❤ have you ever just wondered what it would be like to experience Christmas from another country?? Their traditions and try some of their own countries treats? Well... I would love to swap a Christmas box of my country Canada with anyone who would be interested in swapping a box a goodies. This would give us an opportunity to document our experiences from a far away place. I think this would be so much fun! Any takers???

I reacted and we both send eachother a package. Mine has arrived at her house yesterday, so this is my story of today! 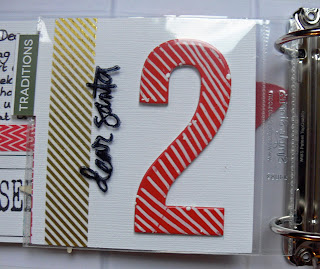 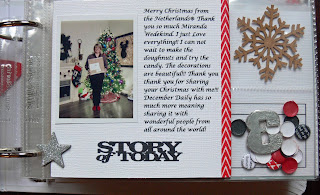 The page is a fold-out page, so I could tell the whole story and share the pics.

This is how the page looks outside the album. 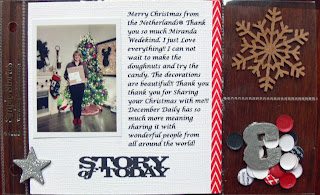 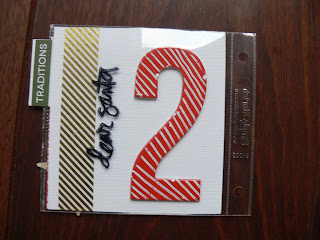 Can't wait to recieve her package...!


My foundations pages for this years December Daily. Every day a story (with picture) in December. Pages are prepped, so December can start.
I took the Storytelling with December class from Ali Edwards and I bought her main kit. Both are amazing and I'm so inspired! 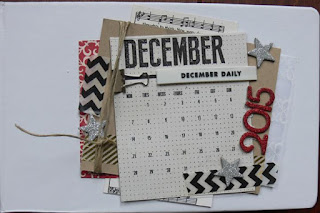 This is the cover of my album. I'm working in a 4x6 album this year. Nothing is fixed to the cover yet, cause I'm getting a new album. This one is loose...
I will add some red drops of pearlpen I think. 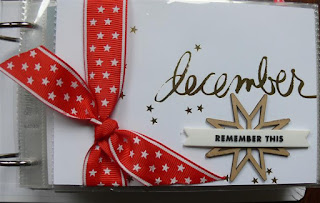 My foundationpages are flexible. I can change things up if I want to or need to. I have more pageprotectors.and more cards laying around.

While I'm working on my DD 2015, I also hope to finish my DD from 2011.  I did finish this album till 14 December. Everything is on my computer, photo's and journaling, from the days after 14 December. So I just have to print ans scrap it. It will be hard, cause it were the last days my dad was with us. But ï'm so glad I have those pictures and stories. It has to be completed. 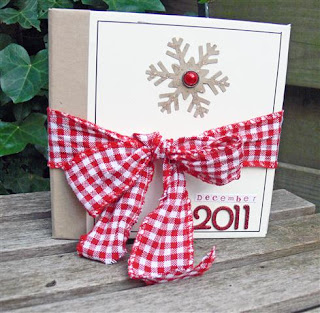